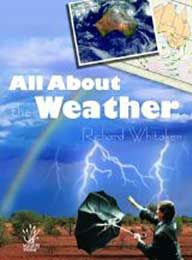 All About The Weather

What are clouds? Where do rain and wind come from? What causes storms with thunder and lightning? What's the difference between weather and climate, and what's causing climate to change both in Australia and across the world. How can we get energy from the weather?

This book from the Young Reed series of natural history books answers these and many other weather questions, and includes:

Richard (Dick) Whitaker began his career in meteorology when he started with the Bureau of Meteorology way back in 1971. He worked his way through the ranks and was Senior Forecaster in the NSW office for a nine-year period before becoming NSW Manager of the Bureau's commercial arm, the Special Services Unit in 1993. He is very interested in meteorological education, particularly through television, radio, and books, and has authored, co authored and edited twelve meteorological publications. Dick is a now Senior Meteorologist with The Weather Channel in Australia and appears regularly on radio and television.