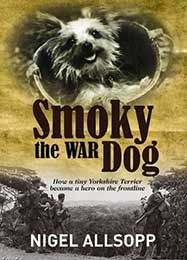 How a Tiny Yorkshire Terrier Became a Hero on the Frontline

$22.99
ISBN
9781742574592
Details
In March 1944, deep in the New Guinean jungle, a little Yorkshire Terrier was found hiding in a foxhole. Her presence there was a mystery, but American soldier Bill Wynne became her new owner. He named her Smoky, never dreaming that his little mate would turn out to be quite so extraordinary.

In Smoky the War Dog, historian and former military dog handler Nigel Allsopp tells the story of Smoky and Bill, long forgotten in Australia, and chronicles his own efforts to see Smoky formally recognised for her war work. He interweaves Smoky?s story with remarkable tales of other military dogs, past and present, and the vital roles they play in wartime.