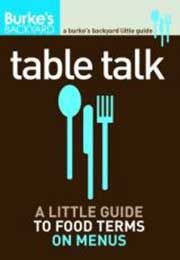 This fun guide from Don Burke takes you through the occasional drama that may arise when eating out!

Have you ever sat down to dinner, only to be greeted with a myriad of knives and forks? Do you freeze at the sight of a cheese platter, afraid to be asked for a connoisseur's opinion? When asked to choose a pasta sauce, do you know the difference between Bolognaise and Boscaiola? Or do you wish they wrote restaurant menus in plain English? That?s where this little book might come in handy one day. It translates a whole world full of non-English menu items into words we all can understand and speak - plain English. A must-have for any diner or socialite, Table Talk is the ultimate glossary to dining jargon, foreign languages (such as Coq au vin) and cooking descriptions. It's small enough to fit into a pocket or handbag.