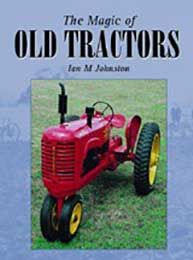 The Magic of Old Tractors explores this intriguing world and is essential reading for anyone with a passion for classic tractors.

What is it about old tractors that is so fascinating and entrancing? The sounds and smells of these old relics? The hunt to find that rarest of models? Or simply the memories such machines envoke? The Magic of Old Tractors explores this intriguing world and is essential reading for anyone with a passion for classic tractors. Renowned international expert and self confessed tractorphile Ian M Johnston invites you to become acquainted with the nostalgic world of spanners, grease and exhaust smoke, and to experience the wonderful world of old tractors.

Ian M. Johnston’s interest in tractors was kindled at an early age when, as a young schoolboy, he was reared in the midst of a farming community located on the east Coast of Scotland. In 1953, at age seventeen, he departed for a two year jackerooing experience in Australia, with the intention of returning to Edinburgh where he had been enrolled in a tertiary agricultural college. But following two exhilarating years in the Australian bush, he acquainted his parents of his intention to remain in Australia and establish a life in the country he had grown to love.