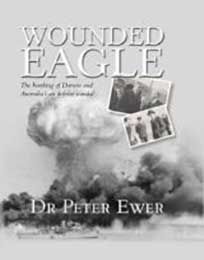 The Bombing of Darwin and Australia's Air Defence Scandal

Read how, on the only occasion Australia's territorial integrity has been breached, the RAAF had little with which to defend the country.

In 1942, Japanese planes bombed Darwin, and flew over Sydney and Melbourne. Why were these planes not shot down? Wounded Eagle explains how, on the only occasion Australia?s territorial integrity has been breached, the Royal Australian Air Force had little with which to defend the country. This devastating expose shows how Australia was left defenceless by a clique of conservative politicians, including Liberal Party hero Robert Menzies, who took decisions that left Australia without an air defence system in its greatest hour of need.

Peter Ewer is a labour market analyst and industrial relations practitioner and has worked as a freelance researcher and in the trade union movement, universities and the public service. With a lifetime interest in Australian nationalism and military history, Peter Ewer published his first work of history in 2008. Peter has a BA Honours (first class), Macquarie University (won university research prize), Doctor of Philosophy, RMIT University (won university research prize). Peter has regularly contributed to Wartime (the magazine of the Australian War Memorial), and academic history journals including Journal of Transport History (University of Manchester); Australian Historical Studies (University of Melbourne); Australian Journal of Politics and History (University of Queensland).